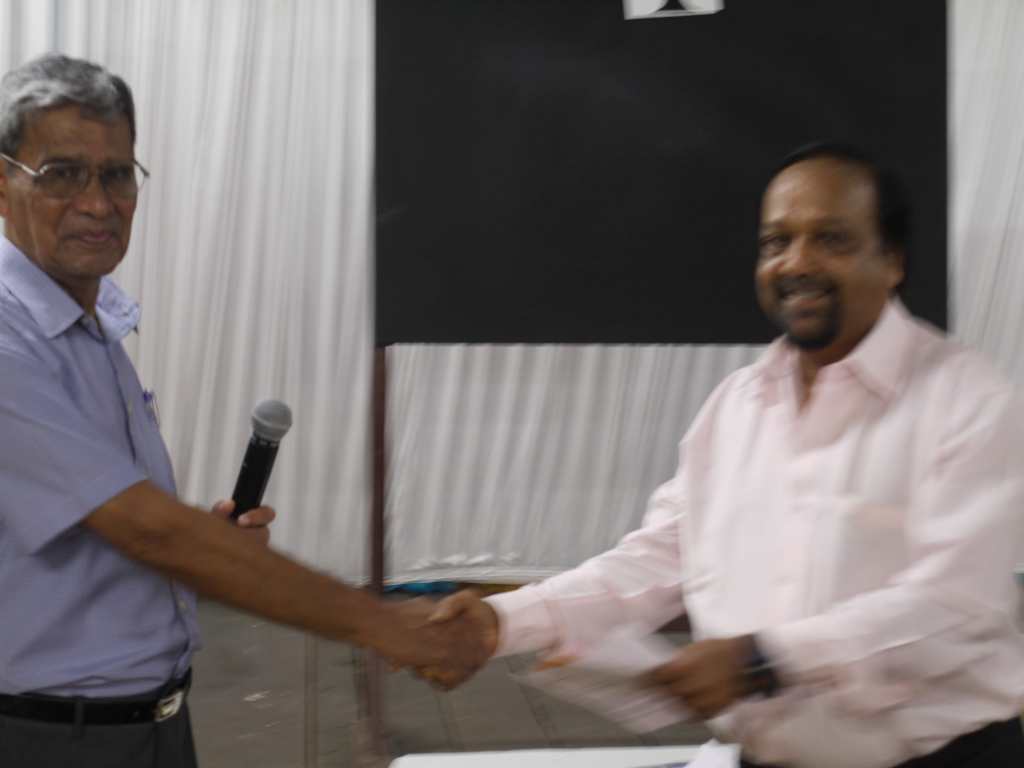 The third Whist Drive was organized by the Matharpacady Residents’ Welfare Association at St. Isabel’s High School on Thursday, 9th June 2016.  As in the earlier Whist Drives, the Managing Committee delegated the responsibility of holding this to Mr. Gerard Viegas. Thirty two participants and other guests were warmly greeted by the Mr. Gerard Viegas as they entered the decoratively lit hall.  Participants, four a table, were seated at numbered tables to enjoy this competitive card game.  The whist drive was in two sessions of six games each.  Gerard Viegas summarized the rules and regulations. Two umpires – Stan Baptista and Gilroy Henriques – monitored the games. The Whist Drive started at 5.45 P.M. and ended at 7.45 P.M.   Stan Baptista captured these moments on camera for us. Light refreshments of hot tea and biscuits were served at the break in sessions, with Sprite given at the end of the session.  Highest scorers were awarded generous cash prizes.  The delighted recipients – Mrs. Joy Henriques,  with 92 points was the first prize winner with highest points. The prize for the highest score in the first half was awarded to Mrs Brenda Texeira with  49 points and the prize for the highest score in the second half was awarded to  Mr Dennis Baptista with 49 points. The prize for the lady with the lowest points was given to Mrs. Charmaine Vongeyer  (68 points) and the prize for the gent with the lowest points was given to Mr Bernard Alphonso (66 points). They all received the gifts to much applause from all the others present.

Mr Gerard Viegas, thanked all the participants and guests for making this a happy memorable function. He assured them that their request for more Whist Drives would be kept in mind and requested them to spread the word round so that we could have more participants.  He thanked the Management and Trustees of St. Isabels High School, Mr Tyronne Concescio and Mr Dennis Baptista for allowing us the use of the Hall and other amenities for all our functions. The Welfare Associations purpose is to bring families closer together at these functions, by fostering a spirit of friendship and co-operation so as to strengthen and build the Catholic community.