Posted By Stanislaus Baptista on Jul 8, 2016 in Events | 0 comments 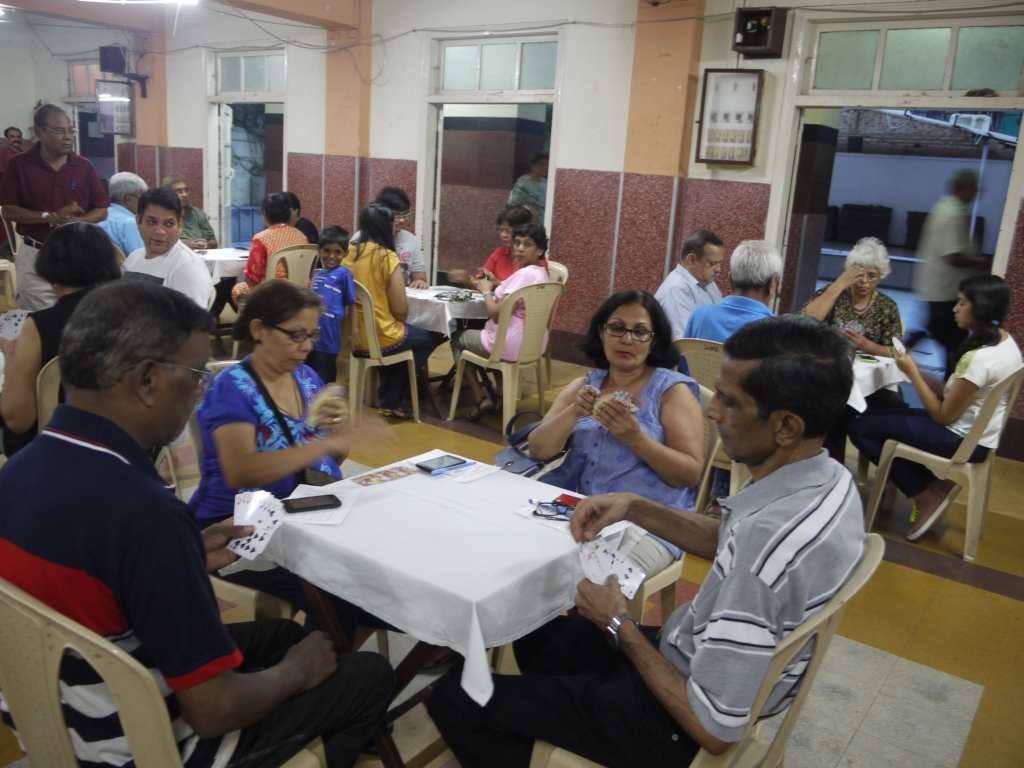 Yet another Monsoon event was organized by the Matharpacady Residents’ Welfare Association at St. Isabel’s High School on Thursday, 7th July 2016.  The responsibility of holding the fourth WHIST DRIVE was again given to Mr. Gerard Viegas. Forty four participants and other guests were warmly greeted as they entered the decoratively lit hall and registered themselves.  Participants, four a table, were seated at numbered tables to enjoy this competitive card game.  The whist drive was in two sessions of six games each.  Gerard Viegas summarized the rules and regulations. Two umpires – Gilroy Henriques and Stan Baptista – monitored the games   The Whist Drive started at 6.15 P.M. and ended at 9.30 P.M.   Light refreshments of hot chai and piping hot bread rolls were served at the break in sessions.  Highest scorers were awarded generous cash prizes.  The delighted recipients – Mrs. Joanita DaCosta and Ms Mary Ann D’Mello shared the first prize,  with 94 points. The second prize winner with highest points in the first session was also shared by Ms Lizanne Noronha and Ms Corrina Vongeyer with 48 points. The prize for the highest score in the second half went to Mr Richard Braganza with 51 points. The prize for the lady with the lowest score was given to Mrs. Maureen Xavier  and the prize for the gent with the lowest score was given to Mr Trevor D’Sylva.  In addition there were three TOTE prizes in cash that were given to Ms Pat Adams, Mr B D’Souza and Mr Dennis Baptista. Besides the above cash prizes, there was a lucky draw and 36 participants were given ladies/gents umbrellas. All the winners received their prizes to much applause.

Mr Gerard Viegas, thanked the participants and guests for making this a happy memorable function, assuring them that their request for more Whist Drives would be kept in mind.  He also thanked our generous sponsor for a Cash Donation, the piping hot, delicious snacks served at the break and also for the Umbrellas. The Vice President, Dennis Baptista spoke of the Committee’s plans for the  forthcoming “TALENT COMPETITION” (Fancy Dress, Singing, & Dancing) to be followed by a MONSOON DANCE at St. Isabel’s on Sunday, 17th July from 5.00 pm. He extended an invitation to take part in this Competition and also get their neighbours and friends to attend the same. Tyronne Concescio informed the residents of Matharpacady Village who were present, on the Revised Draft DP for Mumbai city with particular reference to our village. He requested those present from the village to collect the letters on suggestions and objections to be filed before 20th July 2016. The same needs to be duly filled in and submitted to the Municipal Commissioner at the earliest. The Welfare Association is striving to bring families closer, by fostering a spirit of fellowship and co-operation. This will help to strengthen and build our community.