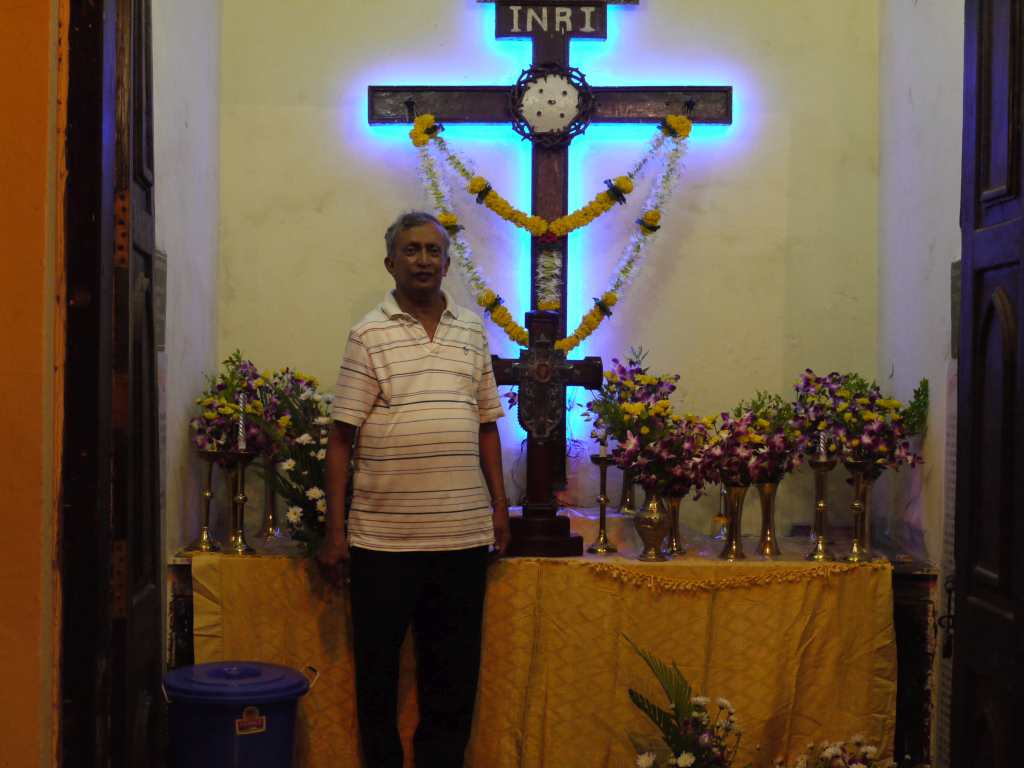 John Bunyan in his book The Pilgrim’s Progress presents the allegory of Christian, an everyman journeying from his hometown City of Destruction to the “Celestial City” atop Mount Zion.  On the way he labours under a heavy burden, in his case, the weight of his sin that he came upon after reading the book in his hand.  Tyronne’s life too was much the same, a constant pilgrimage.  However, in his case his burden was his troubled eyesight.  A major handicap it made him undertake several pilgrimages from the “city of destruction” that lost eyesight is.   It’s tragic that his eyesight stood in the way of his studying further despite having a keen intellect.  But then it compelled him to undertake a journey to North India to seek treatment.  Travelling in the blackout during one of India’s wars, he gained fresh perspectives.

A burden often opens up new vistas and coopts various Simons of Cyrene. Seeking out Fr Dickey his priest relative, Tyronne developed friendships with many priests. In the process he found not the proverbial Simon but the Master, Jesus, Himself. Those who were fortunate to know Tyronne closely will recall that his life too was struggle, persevere, fall, rise, but keep on walking.  All the while like his Master, he reached out his hand to bring happiness to people. I’ve been a witness to the love many of his office colleagues had for him.  At various critical moments Tyronne gave someone a hand. Feast times, Christmas, in particular he was often the first to pop in very briefly to wish the family before taking himself off to the next house and the next, spreading cheer as he went.  And, often his visits were not empty handed.  Working for Britannia he often bought packets of biscuits which he distributed to all those he loved and the list was long.

It is not as if Tyronne didn’t have his balmy days!  Cross Feasts, the polishing of brass under the eagle eye of Aunty Daisy followed by tasty rewards.  Especially chilled kalinga juice on the day itself after a morning of hard work.  One shouldn’t forget the days when Gorai was a virgin beach lined by hedges of mangroves and palm trees recalling the best Honolulu dream.  A versatile writer, Tyronne romanced Aunty Girlie (Marie D’Silva) with his poetic prose describing the place where she owned an ambawadi, much beloved by us children.  Encouraged by his words she literally gave us children the keys to her kingdom and the most magical times in Gorai followed, with swims, sing song and great food.  Yes, Tyronne was a versatile writer, winning over metaphorically priest and prelate alike.  Very selfishly we capitalized on this strength making him General Secretary of every Village based organization.  MRWA and the Cross Committee notably.

After the untimely death of the multi-talented Peter Miranda who was both Headmaster and Managing Trustee of St Isabel’s the mantle of Managership fell on Tyronne’s shoulders.  I always wondered how a person who spent his working life as a secretary hampered by a physical limitation would rise to the challenges a CEO would find daunting.  There is no doubt in my mind His Lord and Cross bearer was behind his rising to the challenge.  With perfect serenity he took charge.  It’s a pleasure to recall the times he proudly related how the school got cent per cent results in the SSC. There were other trustees but in his own quiet way Tyronne forged bonds with all constituencies – students, teachers, office staff and ex-students.

I must confess I pulled a sneaky one on him. After addressing a gathering on careers at the Bandra Gym the East Indian committee backstage tried to rope me in as a trustee of the Bombay Institute for Deaf & Mutes on Nesbit Road, one of the premier institutions for the hearing impaired.  Not as large hearted as Tyronne, I side stepped the issue by suggesting his name.  Next thing I heard, he had become a Trustee of this august East Indian initiative at the service of a specific segment of “non-people” who would otherwise never get a chance in society.

However, Tyronne’s greatest love was for the village.  He leveraged his trusteeship to extend facilities to bond inhabitants together.  Villagers were always welcome.  As were the poor service providers, like the dhobi. In this country it’s the tendency to misuse position to get ahead. Tyronne never hesitated to use position to help others.  Not only that I’ve seen him give time to lonely people, the elderly, the sick and hospitalized.  Never empty handed: patties, samosas, cake, biscuits or even a bag of apples. I’ve caught him sneaking into the Blessed Sacrament Provincialate House at dusk bearing bags of goodies.  A brief popping in, dropping off of and quick exit.  Many a priest or bishop had his lonely life lifted a bit by Tyronne’s graciousness.

It would be an incomplete narrative to forget that Tyronne was all about family.  I recall his tears of sorrow at his sister Audrey’s passing.  Cliffy his brother, was easily his best friend.  His sister Dilys’ children Linda, Astrid, Trudy and Faye were his life and joy.  His cousins and many relatives were clearly dear to him.  It is pretty evident that the love was reciprocated.

Tyronne had a way with words and what he lacked in eyesight, he made up for in memory.  For anyone who’d like to relive life in the old Village nostalgically, here’s a link to a piece that Vincent Mascarenhas did on Tyronne taking us all Down Memory Lane. It’s a journey worth taking for more reasons than one; a life that’s not vanished, but in a way, transformed.

Farewell Tyronne. May angels bear you to Abraham’s side.

From rest and sleep, which but thy pictures be,

Much pleasure; then from thee much more must flow,

And soonest our best men with thee do go,

Rest of their bones, and soul’s delivery.

One short sleep past, (Tyronne, thou shall) wake eternally

And death shall be no more; Death, thou shalt die.