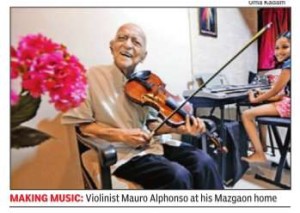 “Now tell me, do I look that old?“ asked Mauro Alphonso, grinning as he posed for photographs, his violin in tow. He certainly did not.

As he laughed and chatted with family members on Monday evening, and recollected anecdotes from years ago, it was hard to believe the Mazgaon resident was celebrating his 100th birthday . The occasion marked not only a century of an adventure-filled life, but also several decades of old Bombay’s musical heritage, of which the garrulous gentleman had been a vital part.

Alphonso was 12 years old when he left his home in Goa’s Taleigaon village and moved to Mumbai to pursue his love for music. Soon, he specialized in playing the violin.

The early days of his career saw Alphonso playing with the Mehli Mehta Orchestra, and then leading several other orchestras in Bombay .During the 1940s, Alphonso was popular on the city’s music circuit. He performed with artistes like Dominic Pereira and Gopi Krishna, and was a familiar face at gigs hosted by venues like the Taj Mahal hotel, at Parsi weddings and even on All India Radio.

At a special party on Sunday , the family plans to ensure the celebration does full justice to grandpa Alphonso, who ensured future generations didn’t fall out of tune. His three sons inherited his love for music and played at the Taj, when they were as young as 6, 9 and 12 years old respectively . Alphonso also formed the Alph Brothers group (it was later called Alph Tzigane Trio) with them. TNN