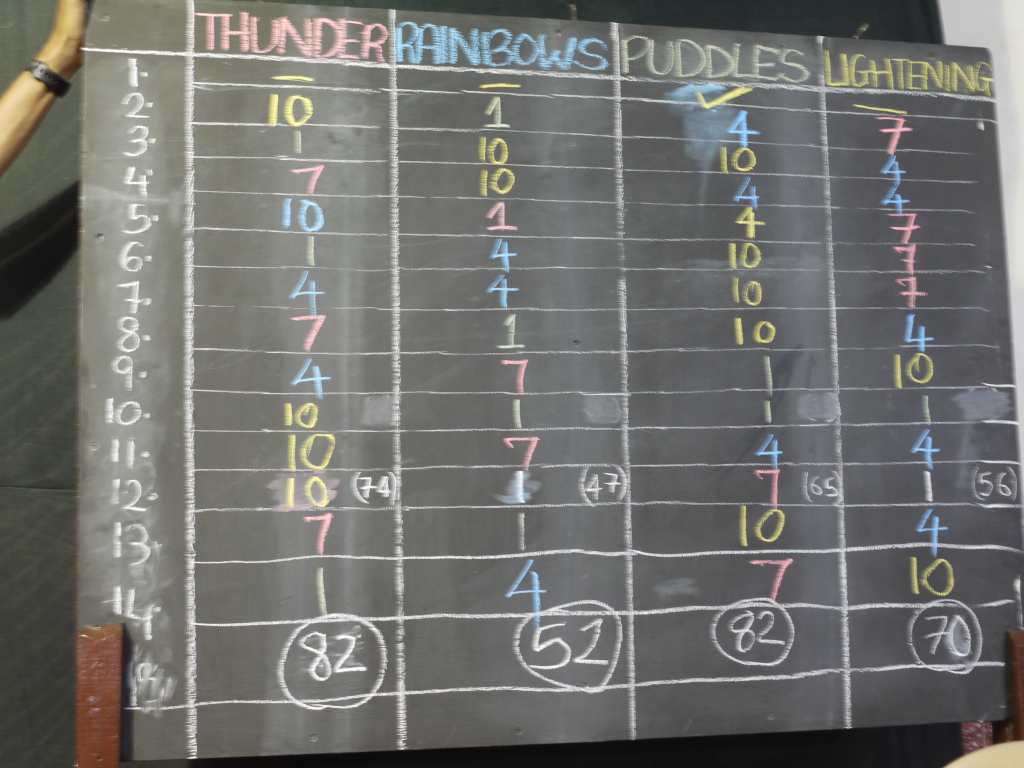 All the participants took part in each of the series of tele-games which were innovatively planned with surprising twists and turns around the hall venue.  Excitement gripped the festive air as exuberant team mates and supporters cheered the contestants on at every stage of the games.  Small kiddies, young children, youth, middle-aged and seniors eagerly awaited their turn, enthusiastically competing in their event.  Team leaders, team mates and supporters watched with bated breath as the score points were marked up on the scoreboard after each series of games.

The Treasure Hunt in the school compound set the tone for the start of the evening after the first clue was handed over to the respective team captains. All the participants went helter skelter searching for the clues around the compound in the light drizzle and there were shouts of glee whenever they found their clues. The next game of “Infra Red” for participants between 3-6 years as well as 7-15 years saw the contestants trying their best to get through the spider web without touching the thread in the enclosed arena in the hall. Participants of 7-15 years tried their luck in hitting the darts provided at the magnetic Dart Board hung around the stage. This was followed by the participants in the age group of 16-26 years Balancing the Water Balloon walking back to back in the compound without the balloon falling. Bouncing the Ping Pong Ball in the bucket was the next game for the 27-49 years old participants.  The Senior Citizens enjoyed themselves at their game of Musical Chairs moving to the beat of the DJ Clinton. The Marble and Spoon race got the tiny tots engrossed ensuring that they did not drop their marble while at the same time keeping an eye on the other team participants.  The 7-15 year old participants looked like bunnies hopping along in the hall in the Sack Race. The budding footballers in the 16-26 year age group tried to hone their playing skills in the Penalty Shoot out. The Snake Trust Group game kept all the six blindfolded participants on the edge being guided only by actions by their team mate at the end of the snake to pick up the various soft toys strewn around the quadrangle and put them in their respective buckets. FoosBall played with six players aside, kept the crowd engrossed. The players had to retain their position throughout the game (within the White Circle) while kicking the football to score a goal only from their fixed positions among their team members. The Senior Citizens had to use their skills in Magnet Fishing to form the word “RAINBOW” from the alphabets strewn below the stage with the help of the Fishing Rod. The last game of the evening which was a group game was Snakes and Ladders. The participants enjoyed themselves moving up and down the board either with the help of ladders or being eaten up by the snakes after the dice was thrown by them.

There were two snack breaks, the first after the Musical Chairs and then after the Snakes and Ladders game. Participants were served wafers, chicken patties, Vegetable Samosas, and Frooti during these breaks.

As the games ended, the teams and supporters assembled before the stage for the awards ceremony. Vidhya announced the prize winners amidst rounds of applause –

Thunder and Puddles tied with 82 points. However, since Puddles won the Treasure Hunt they were declared the Winners, followed by Thunder. The Third place went to Lightning with 70 points and the fourth spot to Rainbows with 52 points.

Amidst thunderous applause, all teams were awarded prizes  –

Clinton Lobo was thanked for arranging the music, Stanislaus Baptista for doing the honours as the official photographer, our President, Percy D’Souza for sponsoring all the prizes as well as preparing some of the props for the games, notably the giant Snakes & Ladders canvas; St. Isabel’s School management for their constant support to the association and organisers of various events held in the school premises from time to time.

We record our heartfelt gratitude to the organising committee and all participants who experienced a wonderful evening of sporting camaraderie and a memorable, enjoyable ‘Monsoon Splash’ at our tele-games.

We reproduce below a couple of written comments received from one of our participants, Wendy Patrao from Gloria Church Parish ~

“What an awesome time I had today. Loved all the games, so very creative and the rules were planned very well!!!  Any such events, please keep me posted. It was so well organised without waste of time U kept us on our toes. What a fabulous end to my weekend. Please convey my feedback to the organisers. Well done.”

“Bath and body products is an excellent idea for prizes.”

In fact, almost all the participants thanked the organisers before leaving, for the wonderful time they had….