Meet the Ghosts of Matharpacady Past….

Home » Events » Meet the Ghosts of Matharpacady Past….

There’s often a right way and a wrong way to enter a place. When it comes to the Village, there are many ways.  Right or wrong, depends on what you want and where you want to end up.  A bit like Alice in Wonderland or Through the Looking Glass. You might happen upon a beauty or you might meet a ghost.  Depends upon you.  No white rabbit here though, but check this out: 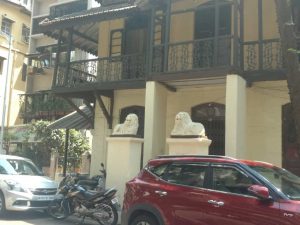 Home of the Leao family: Daniel, Alma, Fred, John.  And their descendants.

And Sammy, former President of the Cross Committee.

The Bible relates how the Israelite prophet Daniel, a prominent official in the Babylonian King’s court was thrown into the Lions’ Den because he stayed true to the one true God and refused to worship the mortal king.  God shut the lions’ mouths. Daniel was awarded greater honours while his accusers were thrown to the lions instead.  Now figure out who inspired this house’s name.  If you get it wrong the two stone lions on the gate will chew your head off when they come alive … 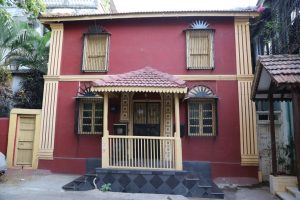 Once upon a time when you entered the Village sounds of the piano or other musical instruments greeted your ear.  23 D Matharpacady, known just by a number, the HQ of the Lopes family. Sundays saw Lt Cdr. Eric Lopes and his daughter Dagmar playing classical Western music on the musical saw (an instrument that looks much like an ordinary carpenter’s saw, played with a bow drawn across the non-toothed side. Tension on the blade and degree of bend gave the desired note) accompanied by his brother Ian Lopes on the guitar. And, a hall full of rapt listeners. Want to see them in action dig up the two episodes of Surabhi (ex Doordarshan) that feature them.  There might still be a saw or two left in Matharpacady but the players are gone… 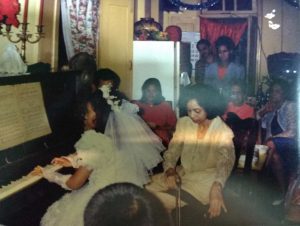 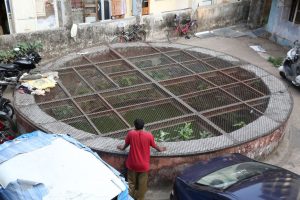 All’s Well with the Village Well

No one’s dropped a coin in here to make a wish. No lovers’ suicide.  No ghost stories, so far. Stocked with fish now, but a trifle overgrown, no village maid has ever offered a lad a drink from it, out of her bucket. Brides and grooms do make a trip to it for their “paani” ceremony. I, for one, wouldn’t draw a bucket to bathe, much less take a swig, but the fire brigade has certainly suctioned its lifesaving liquid more than once to fight local fires.  If you’re scared of ghosts, I wouldn’t count on not meeting a shade here between midnight and 3.00 AM. 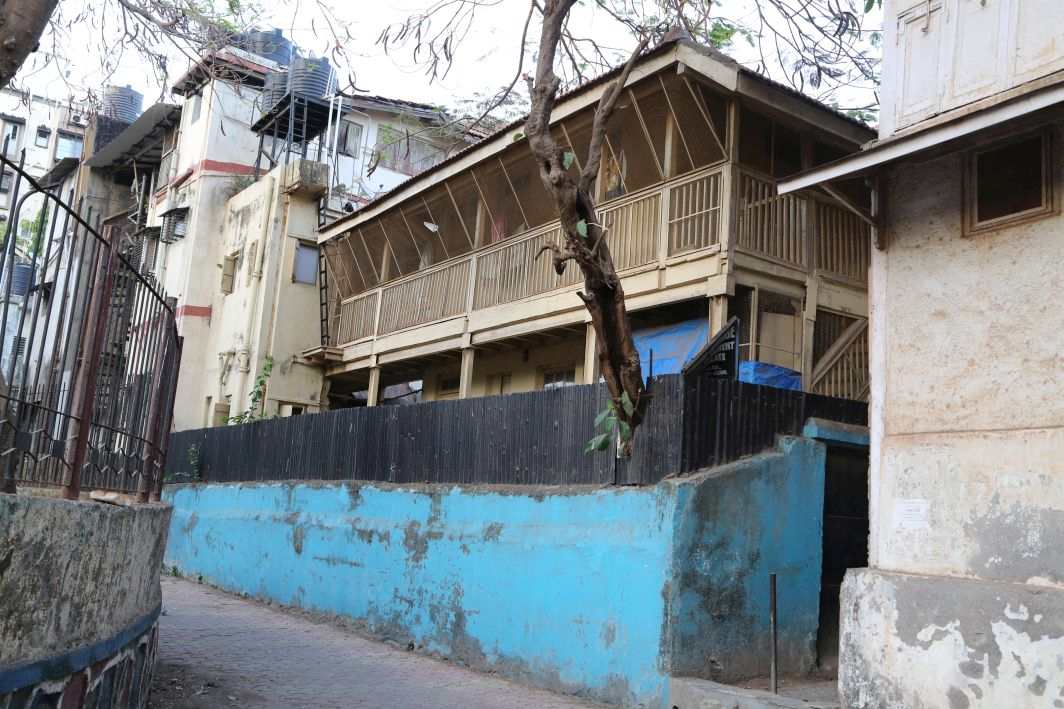 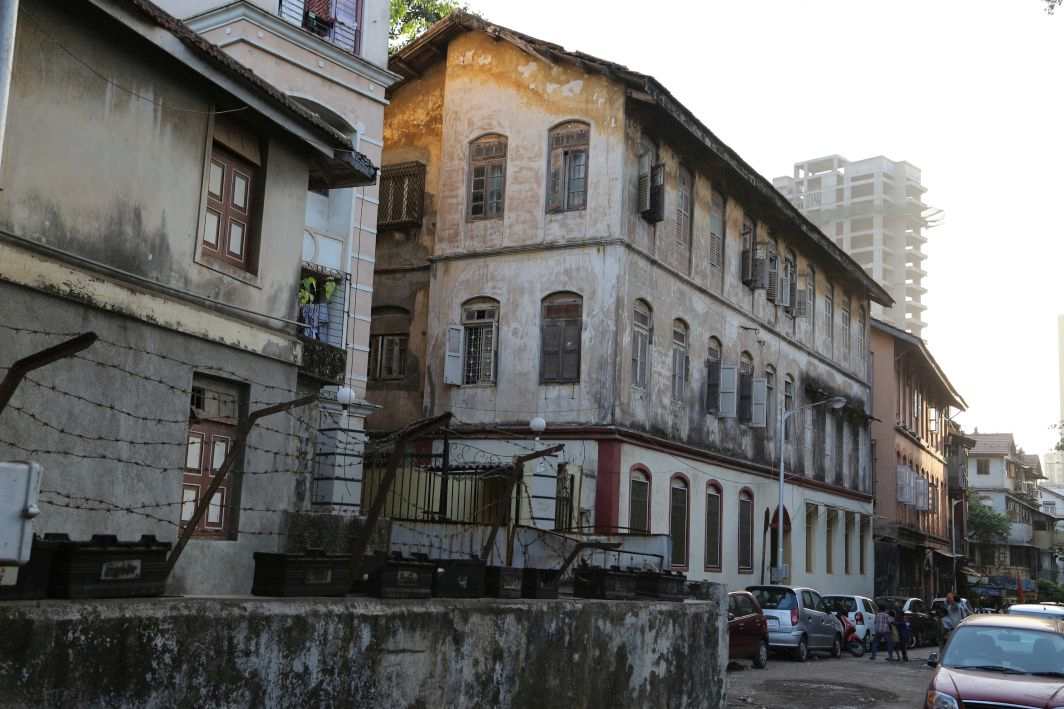 Previously called Tank Square.  Once an open play area bordered by the Bharat Vyayam Shala a low-cost gymnasium where many lads went to acquire their muscles, Tank Square has seen many changes.  In its present avatar there’s a jungle gym and some kiddie playthings and by that token, its grandly called The Park. 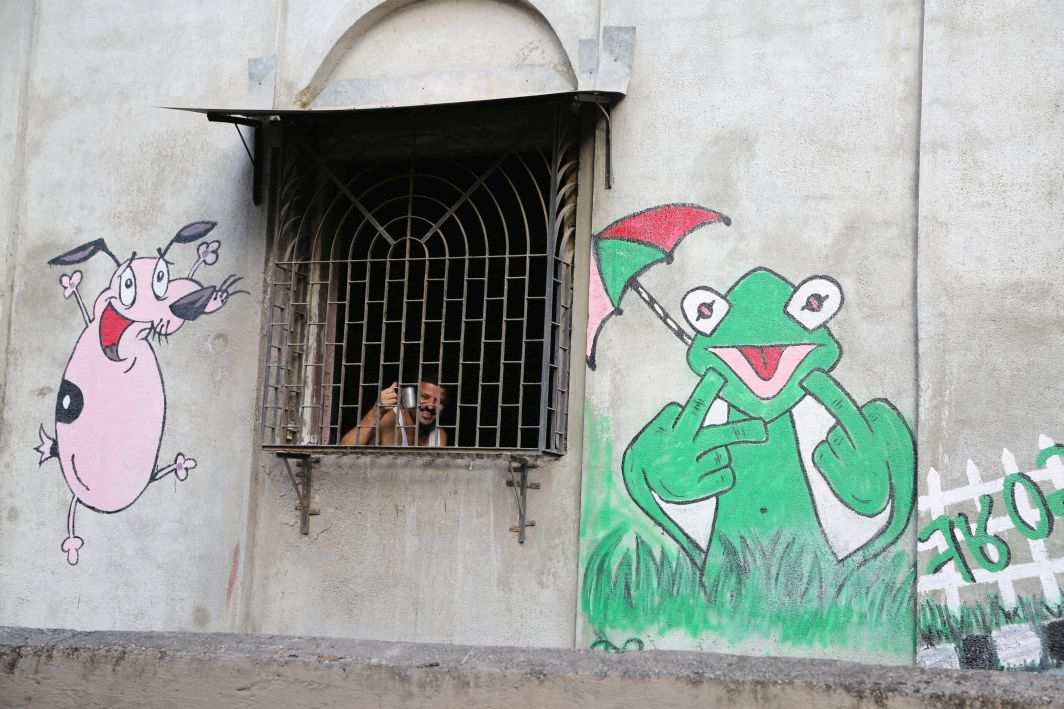 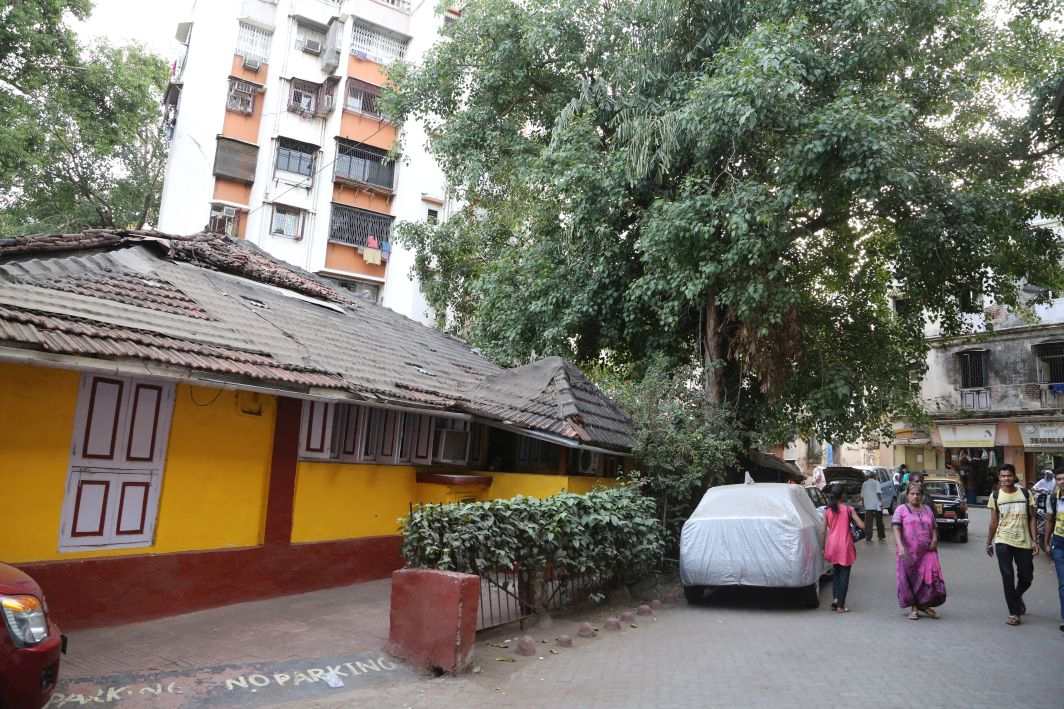 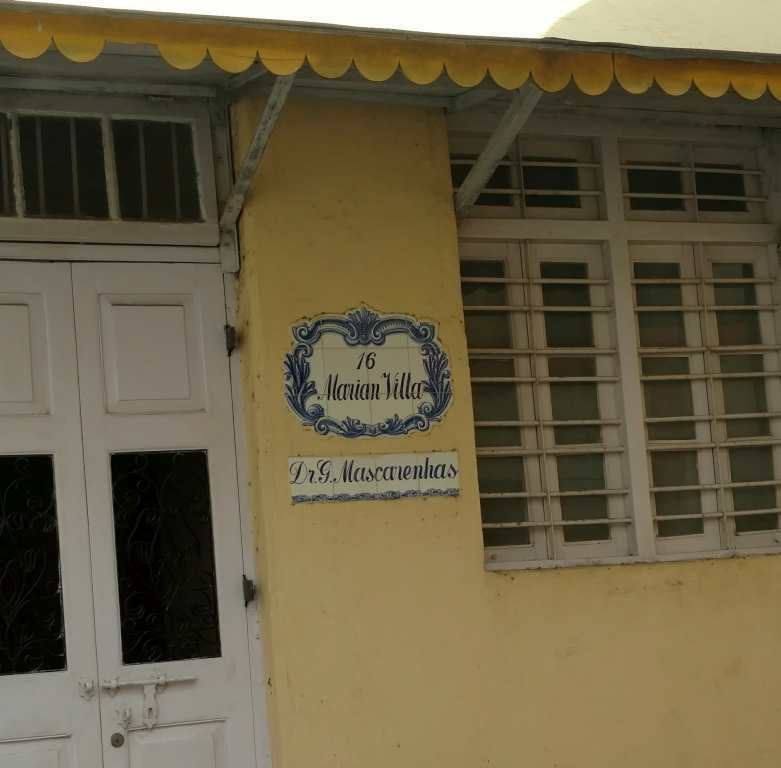 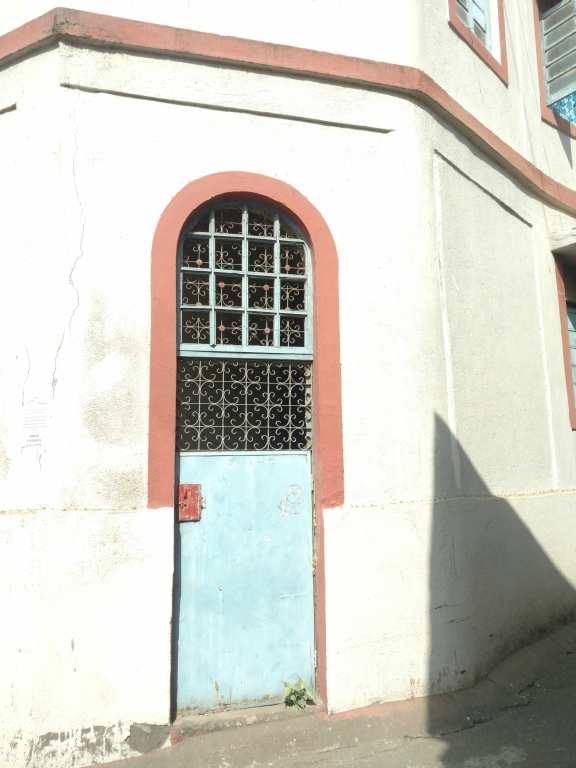 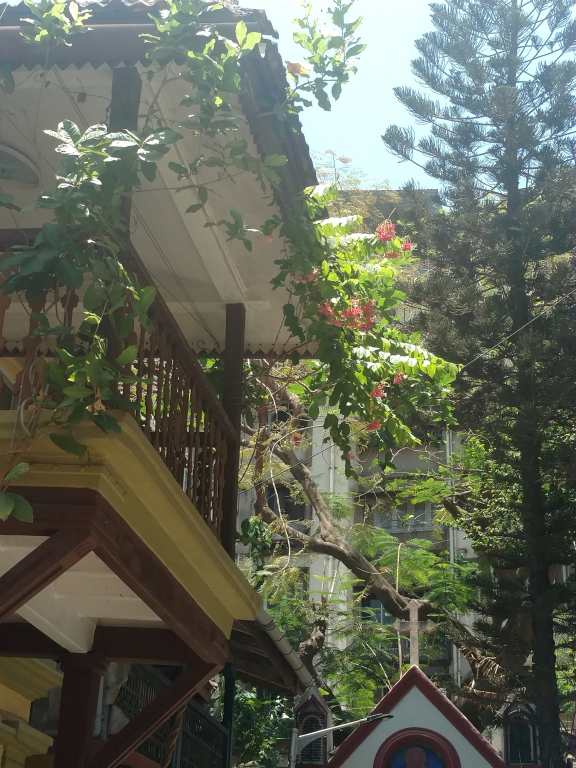 A touch of Azulejo tiling, a bit of street art, shady arbours, mysterious windows, a door of enchantment. Roam the streets of Matharpacady and find yourself in a different world, a living culture of taste and refinement that reflects the cultures that shaped this city.

(Matharpacady was a warren of service lanes and secret short cuts: invaluable to hide in when playing rough games like dabba doobie and seven tiles and you broke someone’s window pane.  Kites were flown from several terraces and dheels or contests were entered into with sharp manja. Marbles, tops, cycling were all popular pastimes before smartphones arrived) 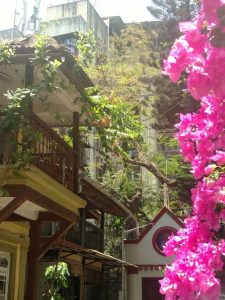 No tour of the Village is complete unless you go behind the Cross and view the location where one of India’s greatest freedom fighters stayed.  There’s, now a big building called Monarch, a take on the name of the original sprawling Raja Bungalow, that it replaced.  The residence of the Village’s most famous son:  Joseph (Kaka) Baptista. 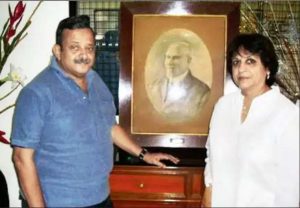 Kaka Baptista was Bombay’s Mayor (1925-26).  He developed ideas for local home rule , deeply influencing Tilak. Together with Annie Besant they formed the Home Rule Movement.  However, his ideas for independence didn’t go down too well with the Brits and there’s an apocryphal story told to me by a now deceased elderly resident.  It seems his mayoralty was snatched away in a year and without batting an eyelid, barrister that he was, he declared “the Lord giveth and the Lord taketh away” obviously taking a dig at the Brits.

There are some ironies to his story.  Firstly, despite being a fervent Christian, he played an important role in popularising the Ganeshotsav festival in the late 19th century, using the community gatherings to mobilise support for the independence movement.  The other irony is that he defended Hindutva ideologue, Vinayak Damodar Savarkar, one of his most high-profile clients.

While sundry netas have signed away mill land to house the rich and famous, it was this freedom fighter and barrister who took up the cause of the mill worker and in 1920, founded the All India Trade Union Congress (AITUC). 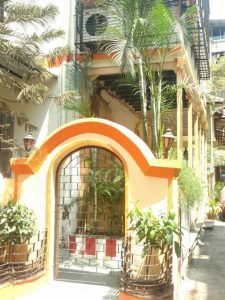 Once bustling with many well-known residents:  John Martin (Jamtin a corruption of the Portuguese contraction of his name, J’mtine), a prominent voice in the singing of the Litany,  St John Valladares (Sinjin) who led the Matharpacady Club for ages as Secretary, Carole Viegas the late President of the Cross Committee.  Bonnie Michael D’souza (Bonnie) whose band “The Bonaventures” was top of the charts for ages in Aamchi Mumbai.  At one point, Bonaventures featured golden-voiced Walter Pereira who lived behind the Cross. 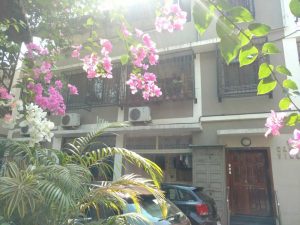 Once called The Rosary but more fondly remembered colloquially as the “lozenger school”.  The former owners, the Ferreira sisters ran a nursery school for tots on their terrace.  At departure time each kid was given a boiled sweet lozenge as an incentive to come in the next day, earning the school its name.

It was renamed Canon Villa by the current landlords, respecting their association with Wilson College and its Church of North India Legacy. A curious shift from a Marian to Biblical nomenclature.

Talking of music, Frank Gonsalves formed an orchestra, of his old students, which met every Sunday in his hall.  This is the same orchestra that played every year for the Cross Feast Vespers which were celebrated on the 2nd of May, the day before the actual feast which used to be on the 3rd of May. It was a grand affair with the singing of the Litany in Latin by the Village’s best voices. 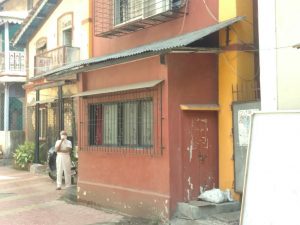 Situated behind the Lopes’ bungalow is the quaint Trilby cottage named after the late Trilby Lopes (nee Azavedo), the late musical saw player Lt Cdr. Eric’s wife.  By the way, once upon a time, the Trilby was a fashionable hat as was the bowler, fedora and homburg. The hat’s name derives from the stage adaptation of George du Maurier’s 1894 novel Trilby. A hat of this style was worn in the first London production of the play, and promptly came to be called “a Trilby hat”. Frank Sinatra was identified with trilby hats, and there is a signature design trilby bearing his name. 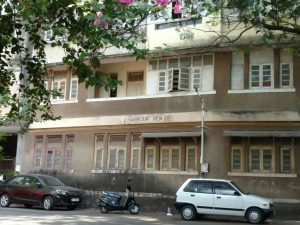 Situated next to Lions’ Den this used to be the height of high-rise in the days when Matharpacady was a Village of quaint and sprawling bungalows. As the name suggests, the higher floors afforded a view of the famed Bombay Harbour to which cargo ships called (before JNPT drew the cream of shipping away). Isn’t it curious that the former building opposite Harbour View was called the Anchorage, another gracious building that has given way to a boxy Kishant? 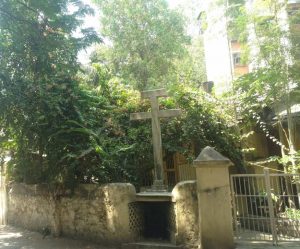 Fifty yards away from Harbour View you’ll find this Cross on private land. The home of the Nazareths.  The day after the Cross Feast it is traditional to celebrate the feast at this Cross.  As children of yesteryear will remember, there was a kind of decorative cherry tree that grew next to it.  Kids never failed to pluck its wild cherries. They were sweetish but full of chik and inedible. The other botanical specimen of interest, hard by the cherry tree, was a drumstick tree often decorated by an abundance of drumsticks dangling from the branches.  Legend has it that a drumstick tree was home to a drumstick like green snake that camouflaged itself and then dropped down onto the head of a victim.  If that happened to you, you were a sure goner. 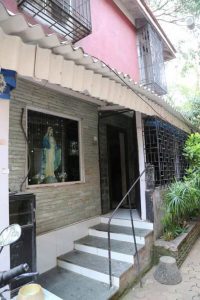 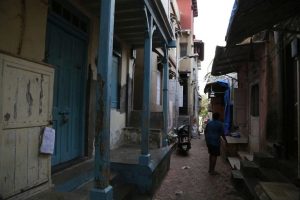 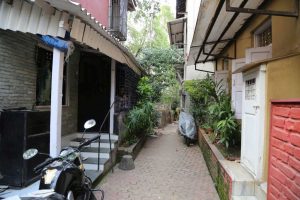 How this very picturesque part of Matharpacady with its old-world houses and narrow mysterious paths got this name is a mystery.  Maybe the settling down of many music loving Goans with their upbeat Konkani mandos had something to do with it; the Latin flavour, supposedly.  One legend has it that the late Joe Pereira, a music-loving chap with a great sense of rhythm had adopted the bongos as his instrument, which he produced on every social occasion.  From Joe’s bongos to Bongo Lane was a short transition.  Who knows?  It still hosts an annual happening jump ‘n jive party.  Find favour and you might get invited…

This is the first in our series of nostalgic picture tours of the Village.  You are recommended to study it carefully because there’s a bonus … the exciting Nostalgia Quizzz is in the works and the clues are hidden here…