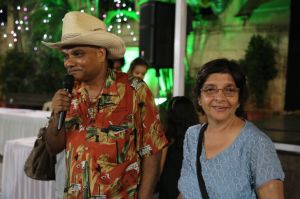 The idyllic and picturesque bylanes of Matharpacady Heritage Village in Mazagaon, Mumbai, were transformed on Saturday, 22nd November 2014. Gifted culinary amateur chefs were busy throughout the day preparing tasty snacks, meals and desserts for the second annual food fiesta that evening. The Matharpacady Residents’ Welfare Association  was showcasing for its members, their families, guests and well-wishers the “FIESTA TRADICIONAL COMIDA” at St. Isabel’s High School Grounds from 5.00 P.M. onwards.   Matharpacady Village resident families were cooking up a storm of traditional culinary delights, be it East Indian, Goan, Mangalorean or ‘hotchpotch’!   Throughout that day the tantalizing aromas of home cooked goodies wafted in the air teasing the taste buds of visitors.  Folk could not wait for the evening to arrive.

The Managing Committee of the Residents’ Welfare Association led by their dynamic President, Mr Percy D’Souza took great pains to organize the Traditional Food Fiesta – well laid out donor entry coupons in exchange for snacks, refreshments and meals laid out around the periphery corridors and compound at St. Isabel’s. Julius Valladares was the coordinator of the Managing Committee of the MRWA in planning and organising this event. All visitors were accorded a hearty welcome by the ebullient duo of Merwyn D”Mello and Xenia Alphonso who anchored the Fiesta.   Joceyln did the honours with an excellent sound system. Around 5.30 P.M. the evening of fun, games and entertainment got off to a rousing start.   An efficient team in the hall ably handled the donor coupon counters for eatable and soft drinks supervised by Gerard Viegas, MRWA Assistant Treasurer.  Amateur culinary village chefs and their assistants manned their earmarked food counters in the porch, corridor and central courtyard.  They smilingly dished out their goodies of appetizing snacks, delicacies and take away food dishes at nominal prices. 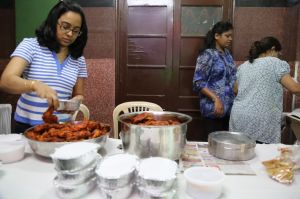 Xenia and Merwyn set the Fiesta abuzz with much merriment, fun and games, inviting the large gathering of children, teenagers, adults and senior citizens onto the floor.   After a rousing grand march which set feet tapping, hands clapping and bodies swaying to the beat of  music,  a introductory  game of drawing playing cards from decks of playing cards  led to mixed teams of diamonds, hearts, clubs and spades spaced around the courtyard by the Joker Merwyn.    Innovative team games – Hanky Panky, Moving it Up, This Blows – began. These were meticulously planned by Merwyn and Xenia, who were vociferously supported by an enthusiastic audience who shouted and encouraged competing teams as they raced to the finish.  Teams competed in eight  events, each of the games was immensely enjoyed by all the members of the teams and the vociferous spectators. Stan Baptista did a masterful job in planning and projecting on screen an enigmatic quiz based ON EVENTS, PLACES AND RESIDENTS OF Matharpacady Heritage Village, from the yesteryears to date.  Team members scratched their heads, racked their brains and came up with various answers.    Xenia and Merwyn with Julius, urged team members on.  The scoreboard highlighted each team’s score. All the teams were awarded prizes in ranking order to the rousing applause of spectators.  Merwyn made two dramatic and startling appearances midway among the games and dancing sessions – lo and behold, Merwyn the Clown regaled the kiddies and audience with his antics.  Yet again Merwyn the ebullient Charlie Chaplin stole the hearts of one and all, with Xenia doing a fantastic job of  compering the entertainment program. 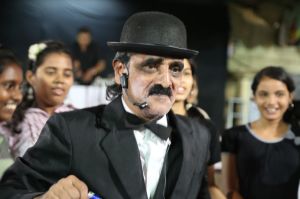 Merwyn “Charlie Chaplin” and Xenia led the teams and spectators in the Grand Parade to the pulsating music dished out by maestro Joceyln.  Folks danced the evening away with fox trots, waltzes, jive and the Masala in gay abandon.  The snack, soft drinks and meal counters saw steady streams of visitors.  Many food counters ran out of snack and food items quickly as hungry visitors relished the home cooked goodies, picking up takeaways for their loved ones at home.   The vote of thanks was given by Julius to Comperes Merwyn D’Mello, Xenia Alphonso and Joceyln Pereira, to all the Traditional Home Chefs, the Trustees of St. Isabel’s High School, the Managing Committee Members, and most importantly the visitors and guests, for making the Food Fiesta a grand success.  Around 10.30 P.M. the Culinary Evening to remember drew to a close.