The name ‘Mazgaon’ was either derived from Maza Gaon which means ‘my village’ in Marathi or from Maccha Grama which means a ‘fishing village’. 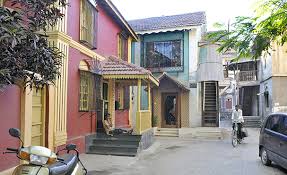 Matharpacady village is self-contained with houses and altars. It boasts of some of the city’s oldest and quaintest houses.

Mazgaon was once famous for its mango trees which would bear fruit twice a year. These mangoes were a celebrated commodity, and the Mazgaon mangoes find a mention as the ‘Mangoes of Mazagong’ in the epic poem Lallah Rookh by Thomas Moore in 1817.

The prominent landmarks nearby are – the Gunpowder Lane that came as a result of the armory, the Megaton Court, and the Sales Tax office. 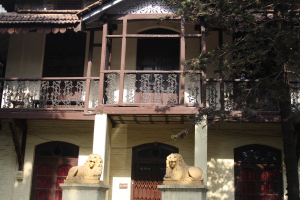 Samuel Leao, 71, says something under his breath to the workers fixing his compound wall; they are unable to comprehend his broken Hindi. “Jesus! In which language do I make these buggers understand now!” exclaims Leao. One of a pair of concrete lions that stood at the gates of his house now sits flush with his front door. “These BMC people are always digging or widening the roads,” he says. At this rate, the lion might soon be chased indoors.

In fact, it was the lions that gave the house its name, Lions’ Den. Built by Leao’s grandfather, Daniel,  in 1892, the house is modelled after its biblical namesake from the Book of Daniel. Although he cannot afford the renovations imposed by the BMC, Leao does them to preserve his ancestral house. Lions’ Den is now quite the landmark in Mazgaon.

Of late, there has been a lot of buzz around Mazgaon, one of the oldest suburbs of Mumbai, thanks to the Navy mishap at the dock here on March 7. Apart from the 200-year-old shipbuilding yard, there is a lot more to this bustling suburb. Like the mango trees of Ambewadi, which used to flower twice a year (mangoes used to be shipped to the court of Mughal Emperor Aurangzeb) or, the Khoja Shia Isna Ashari cemetery, where Mohammad Ali Jinnah’s wife Ruttenbai is buried. And, there is the quaint little hamlet of Matharpacady, which many East Indians like Leao call home.

The many narrow lanes opposite Lions’ Den hold the oldest Portuguese-style houses in the city, complete with colourful facades, wooden staircases and open balconies. For a moment, you would forget that you are in Mumbai, as this grade III heritage neighbourhood is one of the quietest in the city. Rohit Chauhan, who has been living in the hamlet for 11 years, says the East Indians are slowly selling their properties to Hindus and Bohra Muslims. 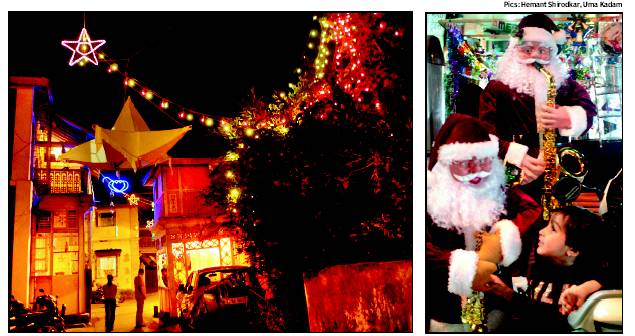 Rafique Baghdadi, journalist, historian and film critic, who has grown up in Mazgaon, recalls a time when the windows and doors of these houses were open through the day. “Now, the residents do not even answer their doorbells, fearing it would be builders who come calling,” he says. But, Mazgaon has managed to retain its character despite the redevelopment. The most cosmopolitan quarter of Mumbai, it has people from all parts of the country, thanks to the docks. “There were Hindus, Muslims, Parsis, Mistrys, Patels, Israelis, Chinese… Very few people know that there is even a Chinese temple here,” says Baghdadi. The Kwan Tai Shek temple was built in 1919 by Cantonese sailors who worked for the East India Company, he says.

The many bungalows that line the streets of Mazgaon are testimony to a glorious past when top officials of the East India Company and the south Bombay elite made it their home. One such historical building is the Masina Hospital, which was once David Sassoon’s palace. Built on the land gifted to Parsi physician Dr Jerbai Masina, who operated on Sassoon’s gall bladder, the hospital is 113 years old. Behram Bakht, who runs the hospital canteen, laments that although the hospital is famous, its founder has been long forgotten. “There is not even a picture of Dr Masina anywhere in the hospital,” he says. So, he put up a framed image of the doctor on the canteen’s wall.

Down the street from the hospital one can see proclainers and cranes working on half-constructed high-rises. Barricades are put up in many a place and workers are busy either digging or filling up holes. Mazgaon, like the rest of the city, is getting ready for an urban facelift. But are its people ready to let go of their heritage?

Daily Rosary During May – Monday & Saturday 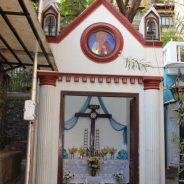 Daily Rosary during May – Sunday & Wednesday

Posted by Stanislaus Baptista on 11:47 am in Events, News | 0 comments

Posted by Stanislaus Baptista on 12:42 pm in Events, News | 0 comments 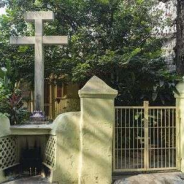 Posted by Stanislaus Baptista on 6:16 am in Events, Holidays, News | 0 comments 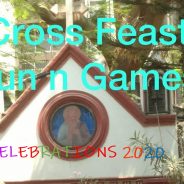 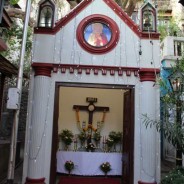 Posted by Stanislaus Baptista on 8:13 am in Events, Featured, News | 0 comments

Posted by Stanislaus Baptista on 6:15 pm in Events, News | 0 comments 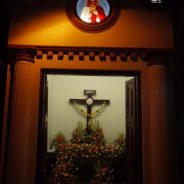 Posted by Stanislaus Baptista on 1:17 pm in Events, Featured | 0 comments

Posted by Stanislaus Baptista on 8:55 am in Events, Featured | 0 comments

Posted by Stanislaus Baptista on 12:55 pm in Events | 0 comments